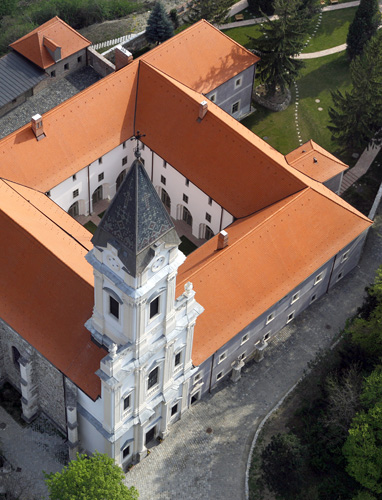 The Monastery building adjoining the nave of the medieval parish church awaits guests  on 3 fully reconstructed floors. Directly after the entrance and the reception hall visitors step into the cloister, which rings the irregularly shaped courtyard, the so-called Quadrum.

The 7 guest rooms opening from the ground floor cloister had originally been used for prayer and meditation by monks. The basic layouts of these individual cells have not been altered. The restoration and reconstruction work preserved the cell walls and converted the spaces into simple, elegant and comfortable guest rooms, while modern amenities have also been added. One of the most imposing places on the ground floor is the Refectory, or Dining Hall. Now it functions as a restaurant, which is serviced by the building’s own kitchen attached to this magnificent Baroque hall.

On the first floor of the Monastery 12 completely restored guest rooms open onto the cloister hall. Another grand space is on this level: the Novitiate exudes an air of tranquility. Today, it is still the Lecture and Conference Hall, as it had been for centuries. Originally the center of Pauline education, it is simple in form, adorned only with symbolic carvings decorating its giant timber beam.

The loft has been converted from its original use as storage to an architecturally well integrated living and community space with 4 guest rooms, and special features, such as meditation rooms, a friendly lounge for comfortable discussion, a kitchenette, and a practice hall. The second floor has rediscovered Gothic features in its new library, which shares large ornate windows with the church.