As part of the cooperation between the Kovács Gábor Art Foundation and the Sopronbánfalva Monastery, renewed in the spring, the Monastery’s gallery presents a selection from the works of József Szurcsik. Capacities opens on 13 October. 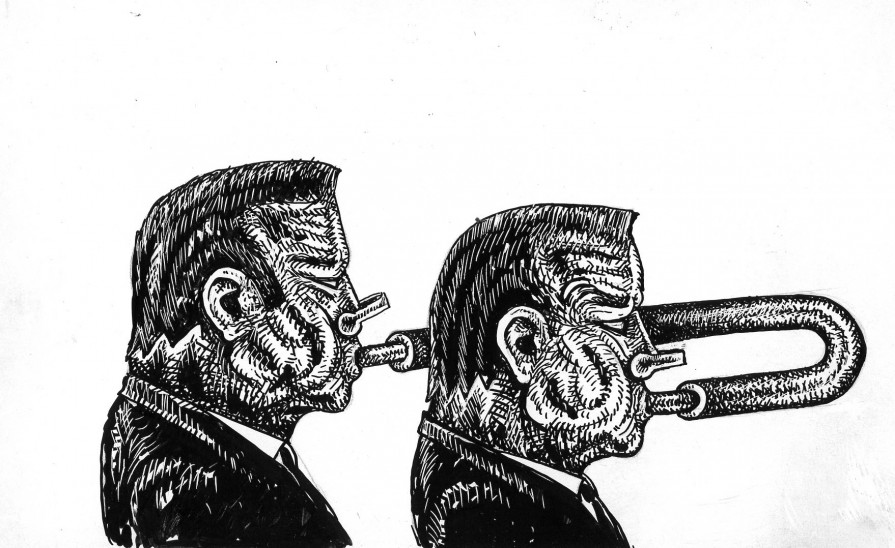 Munkácsy Prize laureate painter and graphic artist József Szurcsik has created a distinctive imagery, whose visual and aesthetic elements are diverse in content, but mostly homogeneous in logic. A greatly versatile artist, he makes paintings, graphic series, three-dimensional images, steel sculptures, installations, and computer-based works
Relationships are the chief concern of his art: he offers visual representations of the links between the individual and the community, between man and society, between the individual and the powers that be. The works seem to form an ongoing series, while there are distinct groups among them.
His works stage and reconcile contradictions. One presupposes the other, while also giving it a name, revealing their absurdity. Szurcsik’s fine systems of lines uncover networks of connections and ideas through his signature motifs, which address the madness of irony and dysfunction.

“My works have been exploring the relationship of the individual and authority for decades. I am particularly intrigued by how the solitude of the individual becomes part of a certain collective solitude. I watch how all this while the individual builds his own defence strategy. I watch how the powers that be simplify social phenomena, and how the individual grows suspicious, will reduce even his own latitude, until fear makes him restrict others’ freedom. In the process, he cripples his spirit and body, and locks himself up in the private prison he built himself. He watches the world through thin openings, though he will no longer believe his own eyes. He is just waiting. No matter how long, because time is no longer of importance. Nothing is of importance any more.”
The exhibition is jointly staged by the Kovács Gábor Art Foundation and the Sopronbánfalva Monastery Retreat Centre, with support from the Ministry of Human Resources. József Szurcsik’s works can be viewed in the monastery until 17 January, 2017, between 10 am – 6 pm daily.